How Big Bend Changed My Life 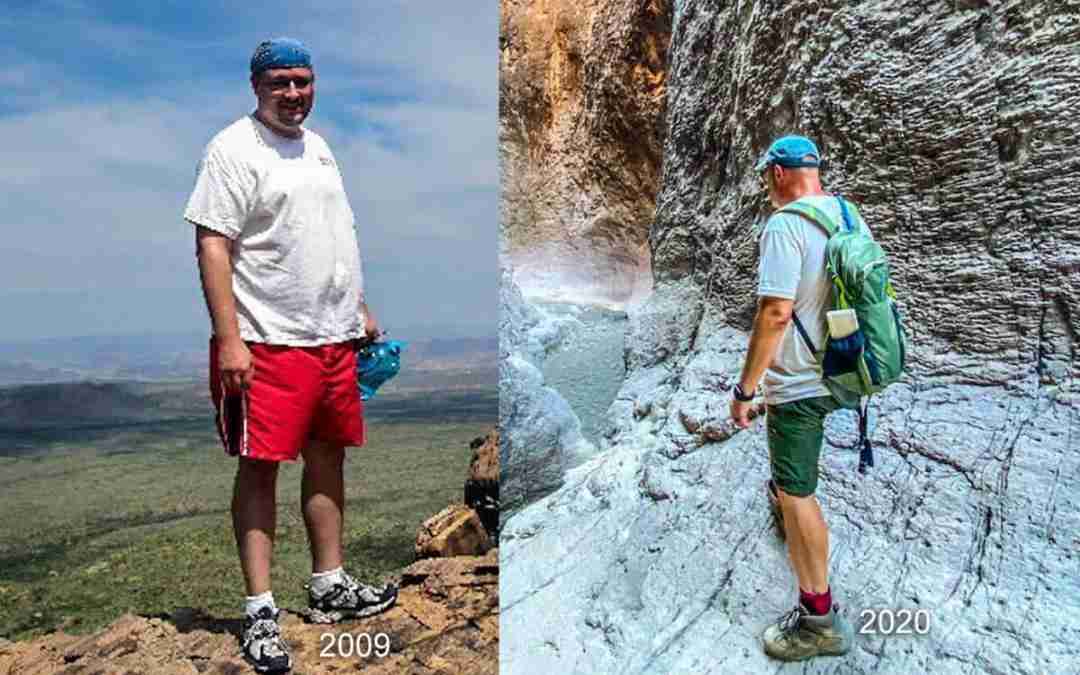 It was the summer of 2009 and I was fresh off a divorce and a sedentary and unhealthy lifestyle. My new super hot girlfriend, and now wife, Stef, wanted to go camp Big Bend and I thought, “hmmm… I think my parents took me there when I was 2. Oh, what the hell, let’s do it.” Aside from that toddler trip, I don’t think I’ve set foot in a national park since.

We made it to the park and entered via Persimmon Gap, the north side. As we approached the entrance, I can remember just thinking, “This is Texas?” It’s like how people from New York pictured Texas in the 1960s. But it was no Texas I knew. Below are some of my very first pics of Big Bend taken on a cheap digital camera that had the photo resolution set way too low by default. I found this out later. All photos in this post are from that 2009 trip. 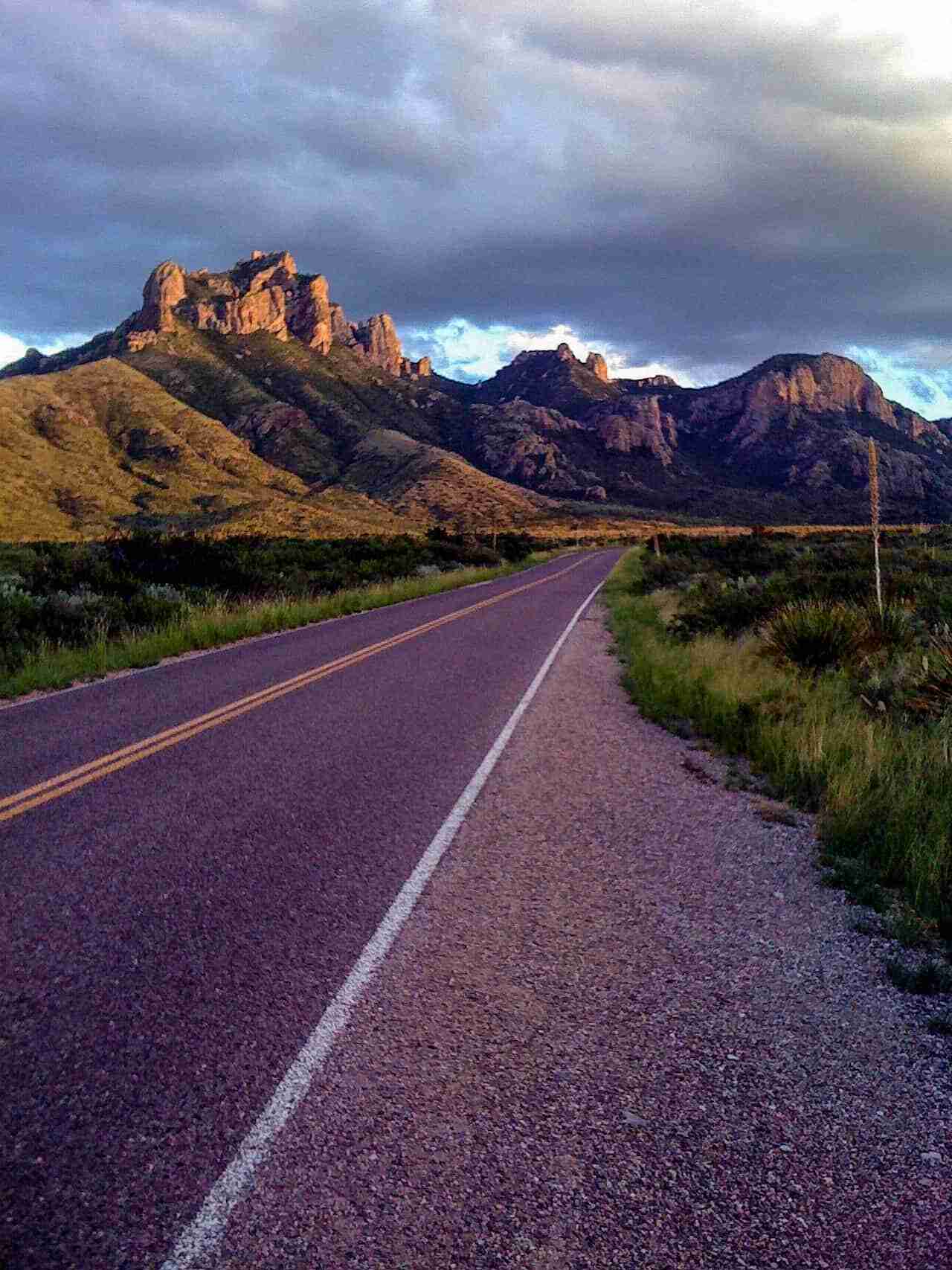 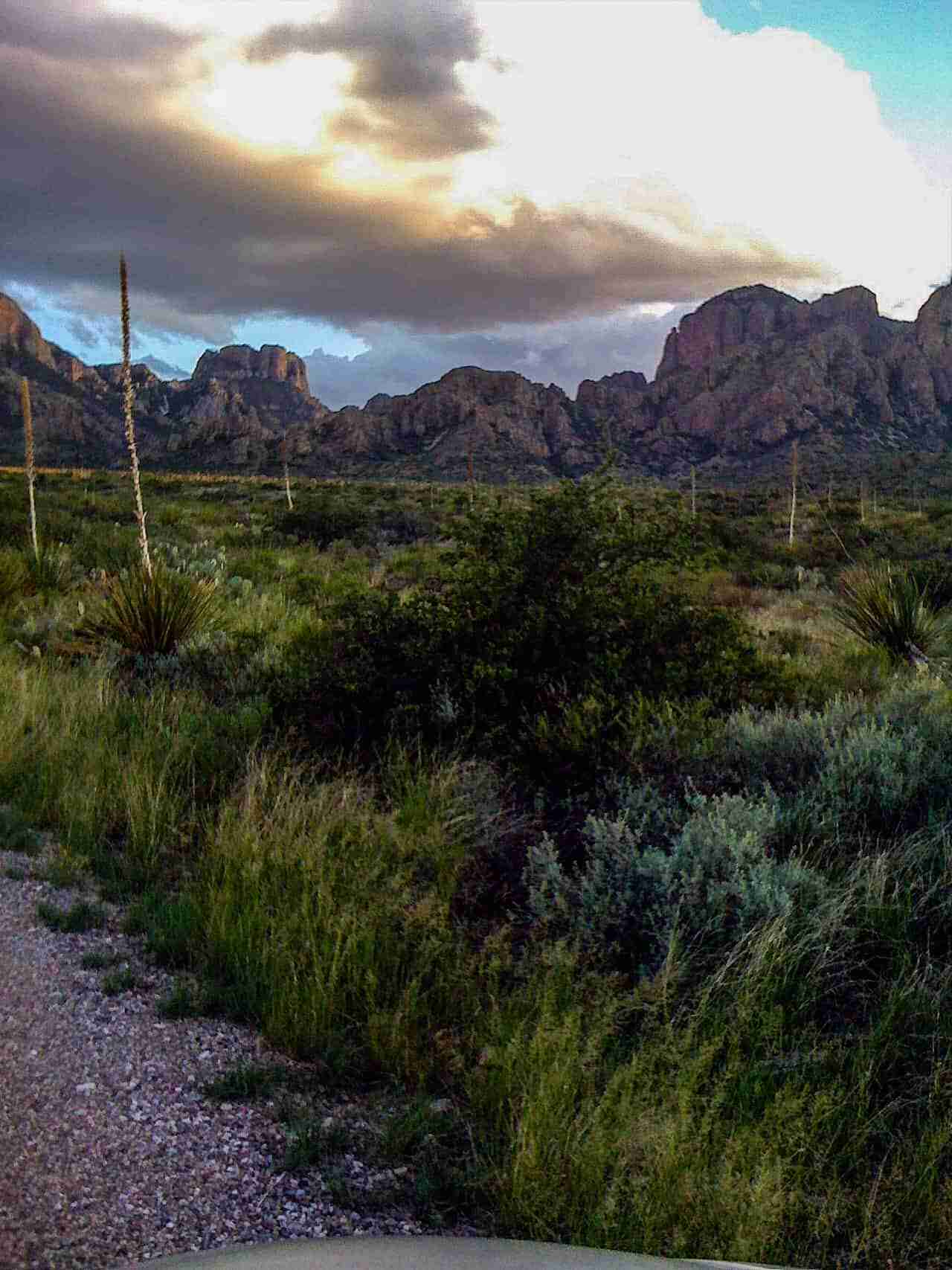 We then drove on and made our approach to the Chisos Mountains. As staggering as that initial introduction was, the views I was now taking in were jaw-dropping. “THIS is Texas??!!” I think JO Langford, the original homesteader of the Hot Springs District, put it best, “There is a strange, mystic beauty about that mountain range, something compelling and mysterious that grips you the first time you see it and never afterward leaves you” -1909. That’s exactly how I felt. There is a real palpable energy felt here.

We made it to the campground and set up in our spot which was a stone’s throw from The Window trailhead. On that day, July 3rd, 2009, we literally had the park to ourselves. At least until that night, when *cue Psycho Movie sound effects* Glen and Farrah showed up in the camping spot next to us. It was late evening, so the sun has set, and Glen and Farrah were setting up. A short amount of time passed and a short mousy young girl wonders into our campsite stringing along with her a tall lanky dude who looked fresh off the meth bus. She introduced them, “I’m Farrah and this is my boyfriend Glen” and I thought, this cute 25-year-old girl is being taken advantage of by a 50-year-old perv. Anyway, they asked if we had an air mattress pump they could borrow. We did and I reluctantly put it in their hands as they disappeared into the darkness back to their campsite. Then I heard the battery-powered pump click on with a high-pitched pump-fan noise. That went on for a few minutes longer than I expected, and then the high-pitched noise became a medium-pitched noise. And then it slowly went from medium to low-pitched. It was running out of batteries and I didn’t have extra. They kept it going until there was no life in the pump. They gave the pump back to us and said thanks. 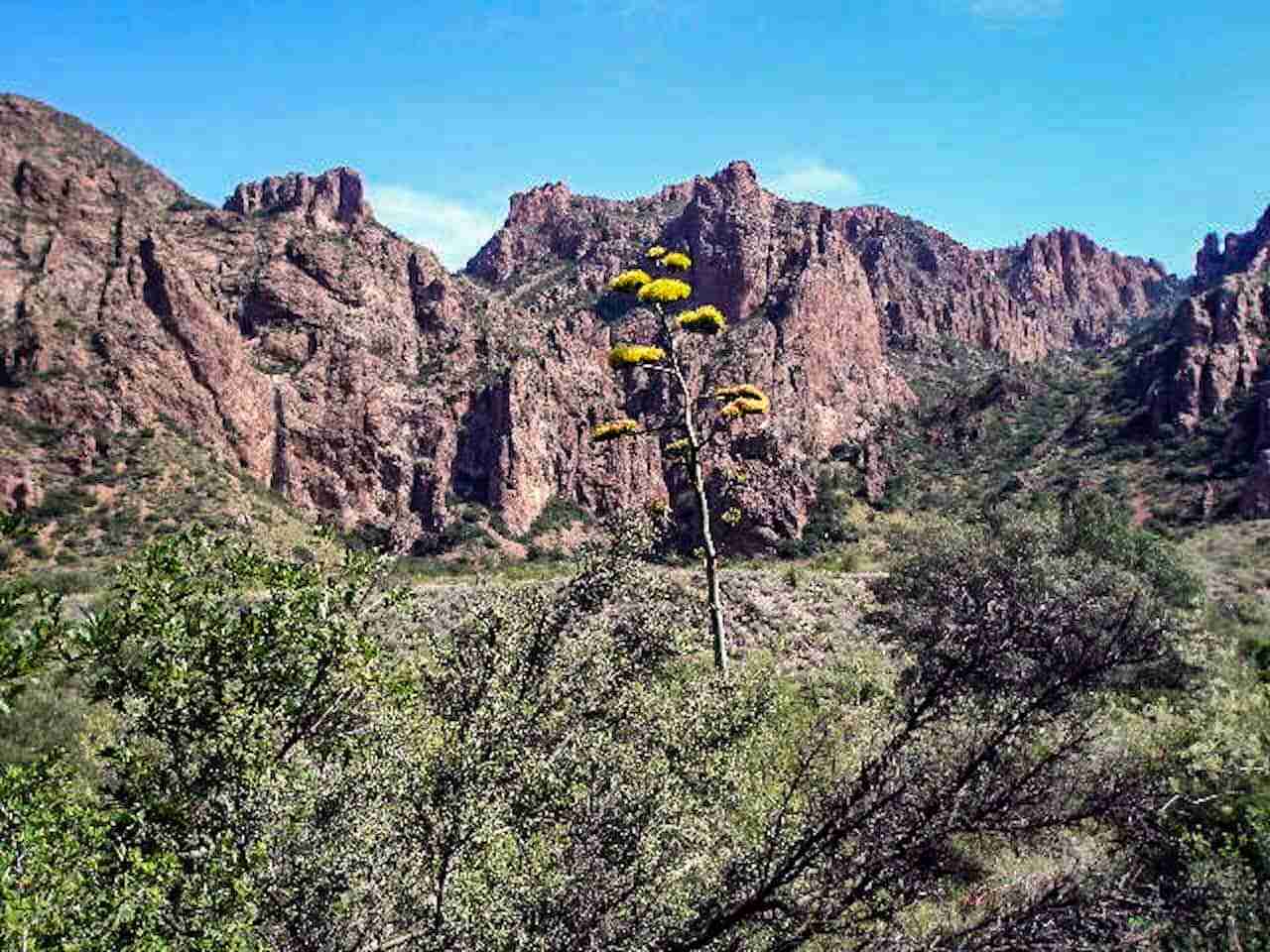 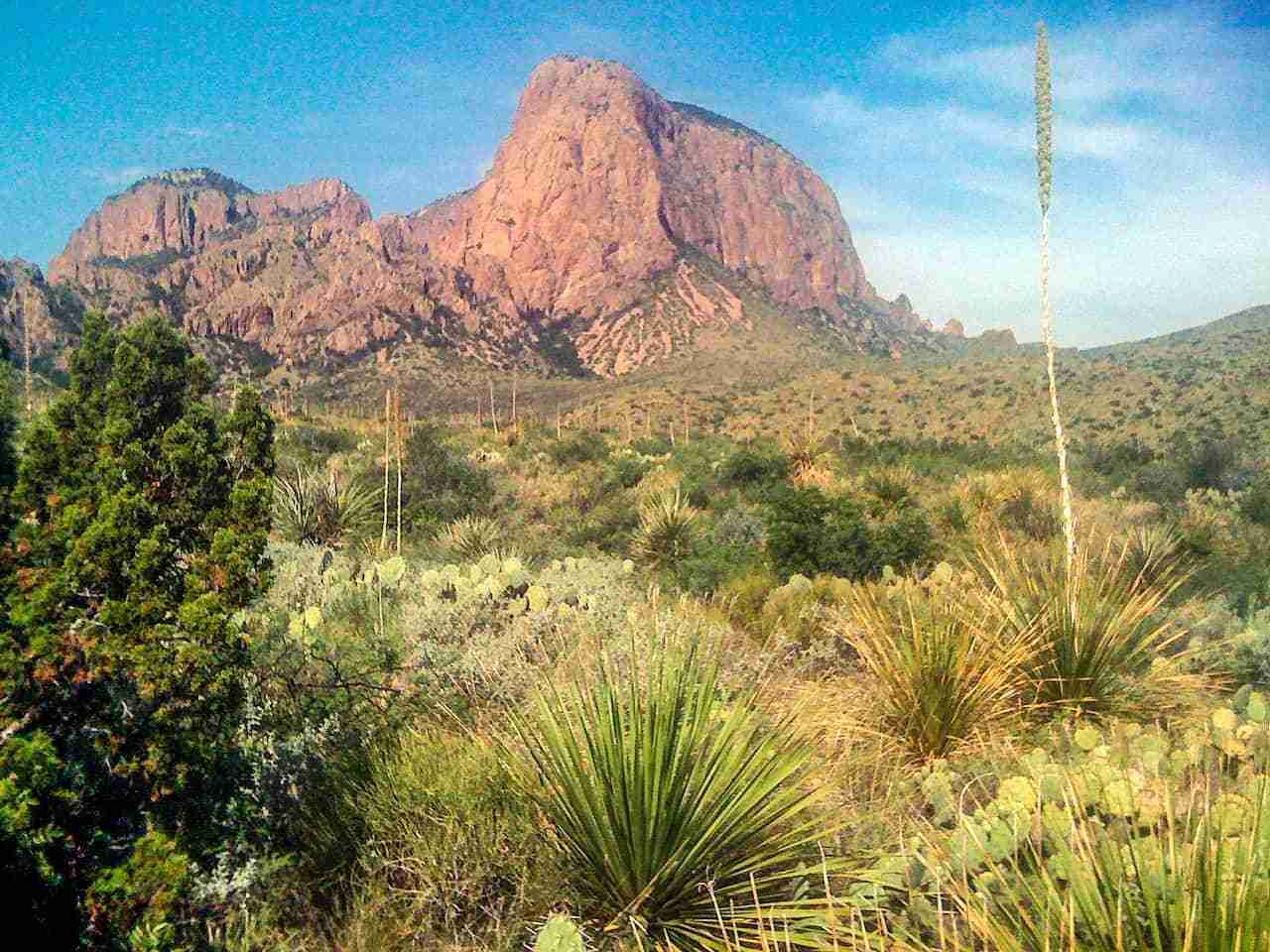 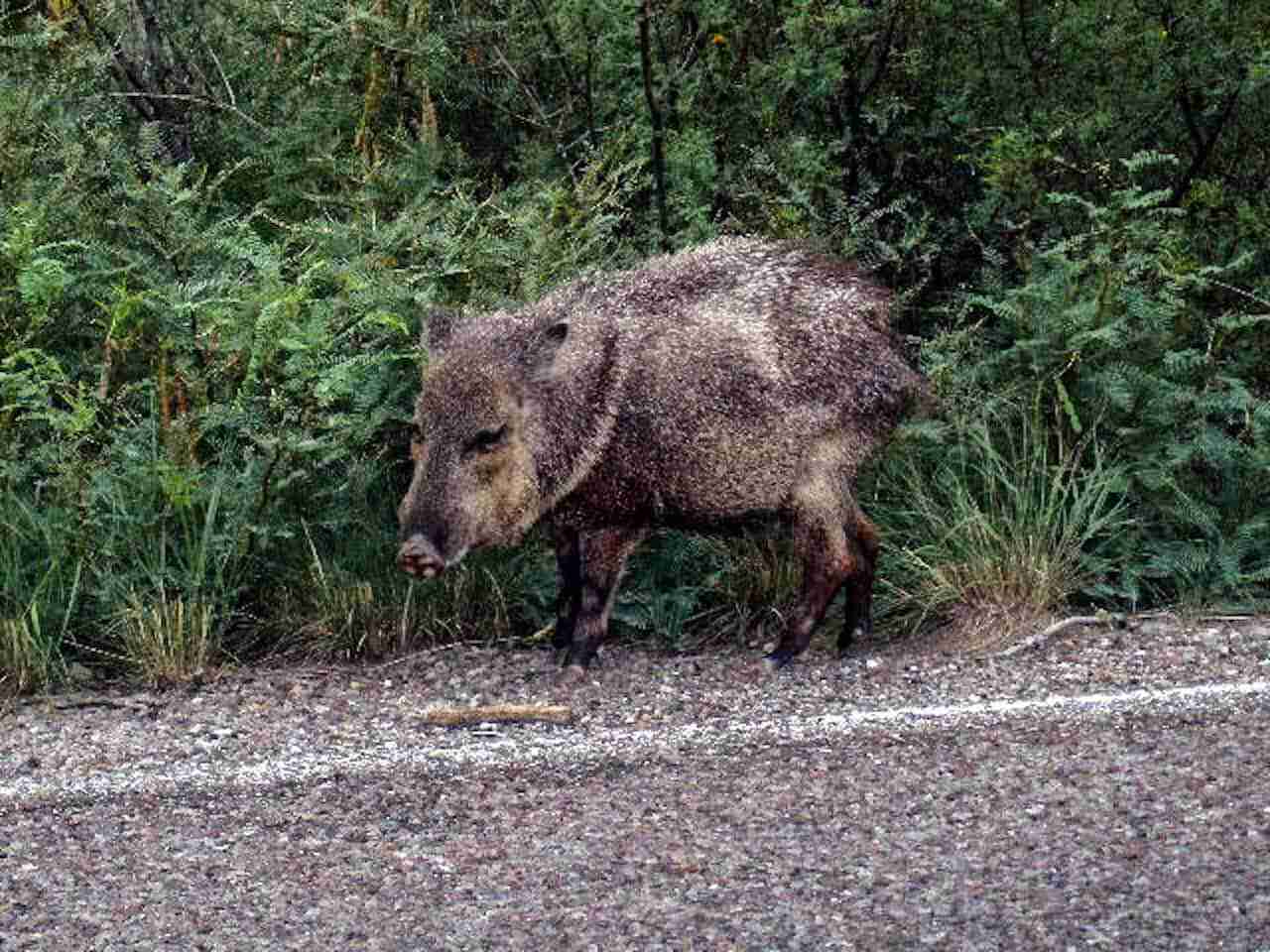 It was the next day. The climate in the basin was tolerable for July, the sky was clear, and we just had a suprisingly good camp breakfast. Stef decided it was time to hike The Window. Hike? Hiking was part of this trip? I had dad sneakers and a cotton t-shirt. I don’t think I am capable of walking a quarter mile much less go hiking! But… My girlfriend, remember, was super hot and I did not want to disappoint her. I still had no idea why she was with me in the first place and I didn’t want to give her any reason to not be. So I was like, “Sure! Hiking is great!”…I have never been on a hike in my life.

So there we were, embarking on a nearly 6-mile round trip hike. It wasn’t bad! Just like taking a long walk! I could do this. As we descended down to The Window, the mountains started to engulf us as we passed cactus, sotol, agave century plants in full bloom, mixed with oaks and pine. It was very surreal. My mind was just bewildered. I was in nature. A connection, I have long lost since I was a kid, was back. The feeling of exploration and closeness with the earth was such an overwhelming magical feeling. Then we got to the payoff, the end of the Window Trail. Never in my life have I ever observed a more intriguing geological formation than what was right there in front of me. I felt like I left this earth and was now in a magical spirit world. Not a single person besides us was on the trail, so we had the often crowded Window to ourselves for as long as we wanted to stay. We sat and snacked and just took it all in. 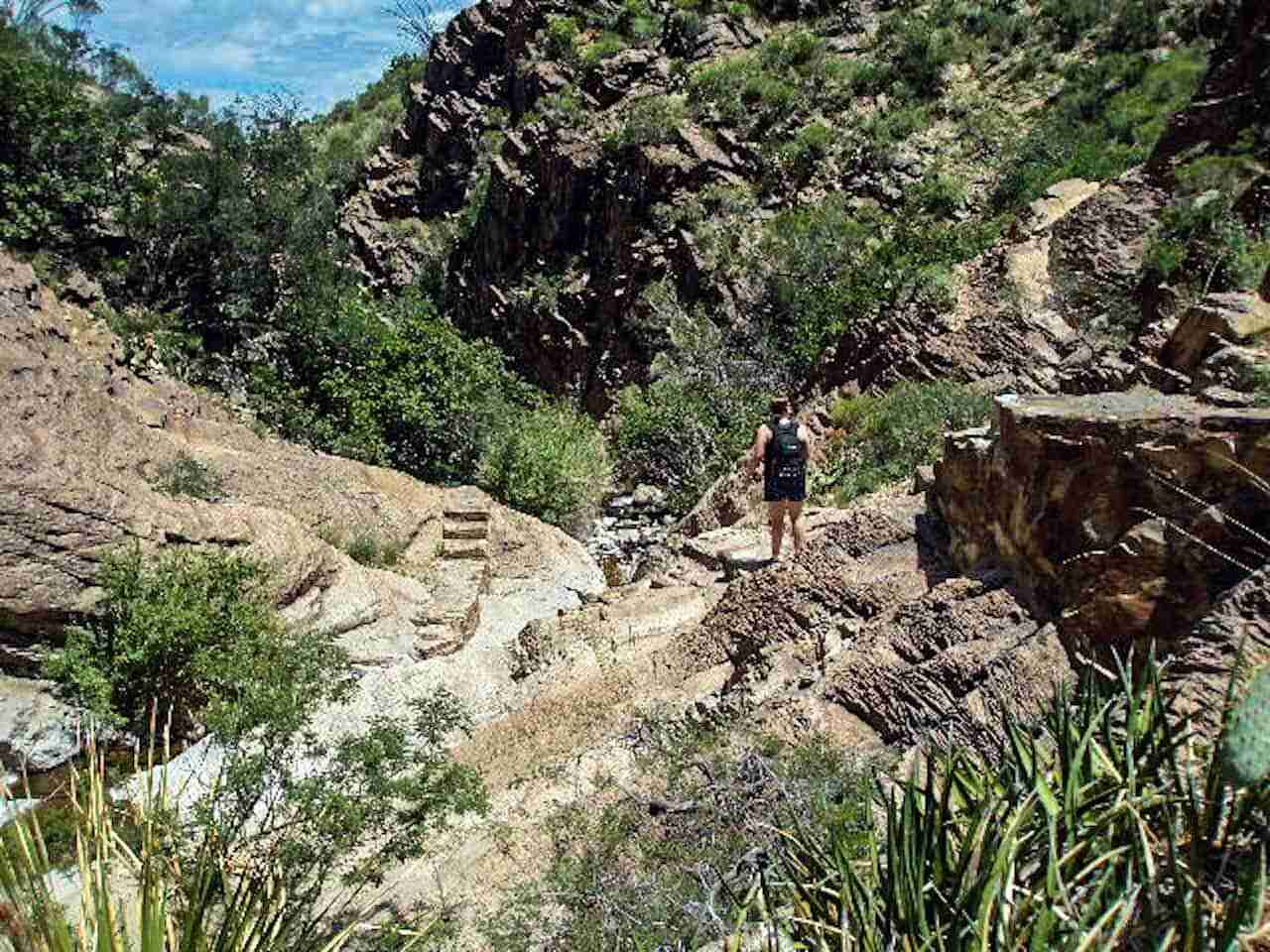 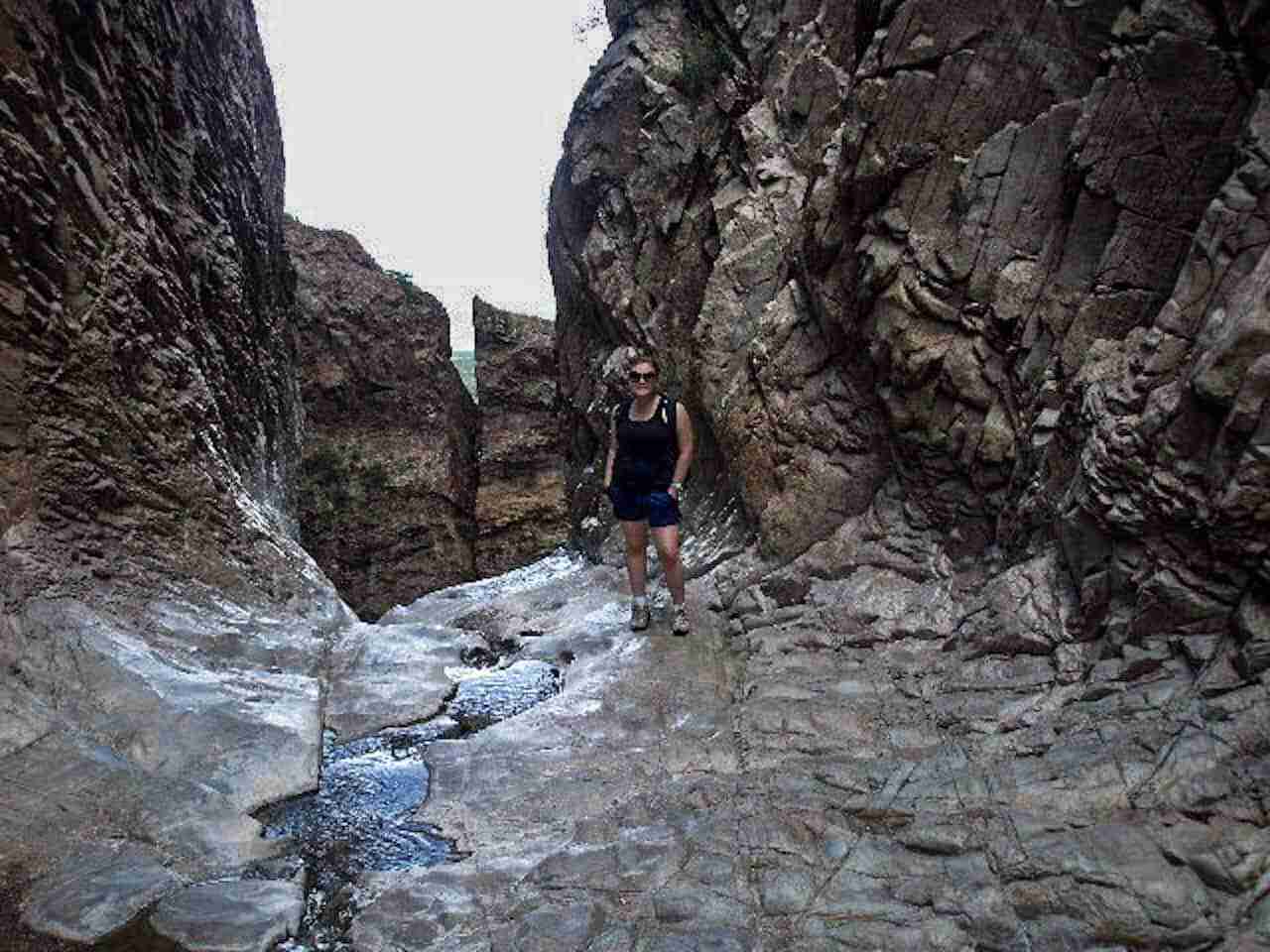 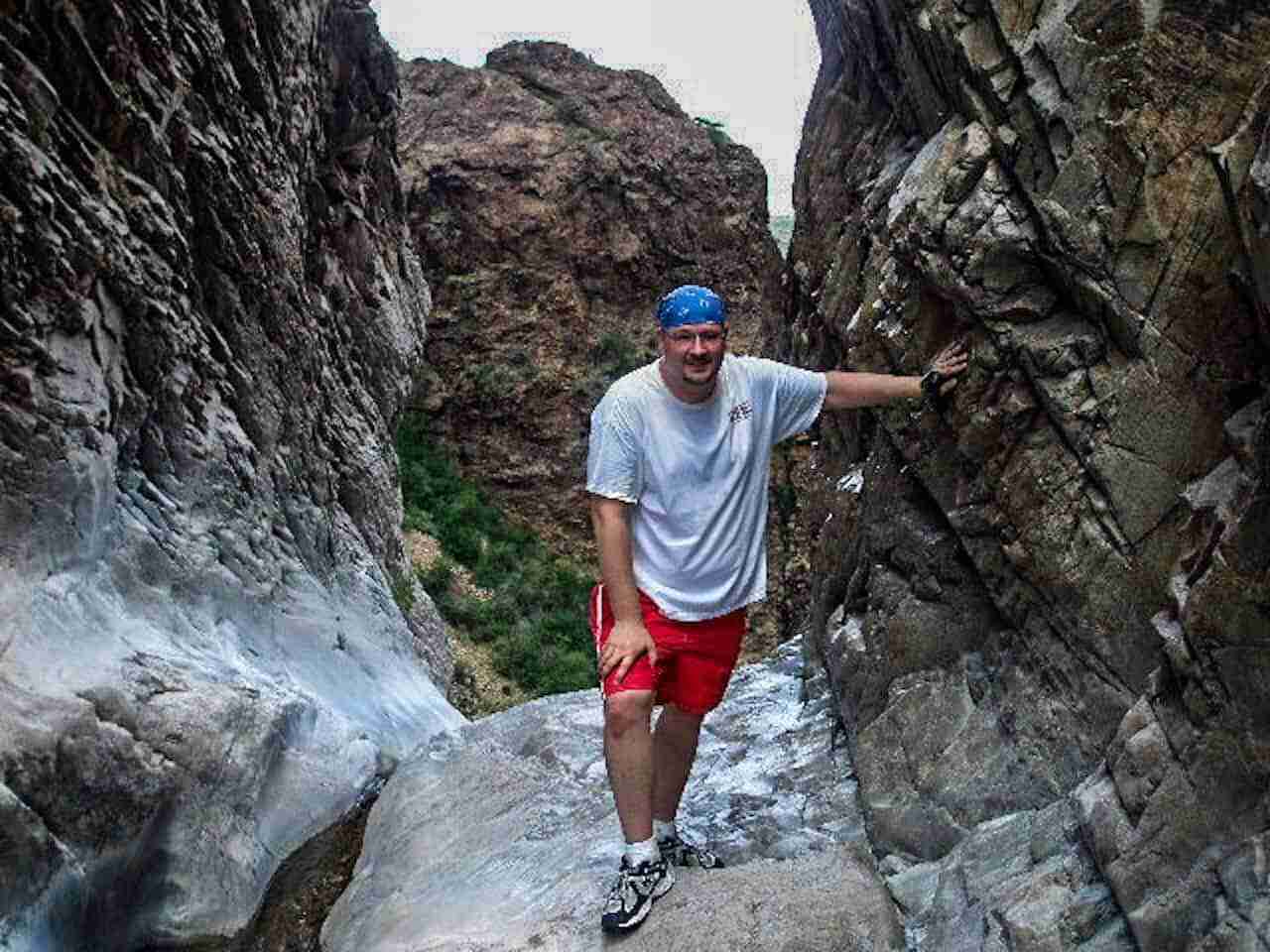 The nearly 3 miles down to The Window was no problem and it was time to go back. OHhhhhh, it was downhill on that first leg. OOohhhhhh, it’s uphill on the way back… Ohhhhhh… We started the ascent back. There’s a rocky canyon portion of the trail that twists around large boulders and cliffs as you traverse the natural drain path. Down and up and around a cliff wall and -BAM- there was Glen and Farrah. She was picking flowers and stuffing them in Glen’s shirt buttonholes and asked if we could take their picture. We did and they offered to return the favor. Farrah handed our camera to methy-looking Glen and said, “He’s a photographer”… Yeah right.

Halfway back, dark clouds quickly formed over us, and without warning, it began to pour. We found shelter on a bench under a large oak tree. We had no foresight to this mountain storm. And we realized we didn’t properly pack our campsite for a storm. We didn’t even have the rainfly on the tent. Our entire campsite was going to be soaked. And great big alligator tears welled up on Stef’s face. I didn’t want this most magical time to be ruined and have an upset hot girlfriend. So I calmly said, this area is a micro-climate. These are popup storms and our campsite is over a mile away. It’s very likely we can get back to our site and it is completely dry. The rain stopped and we finished our trip back to our campsite. It was completely dry. 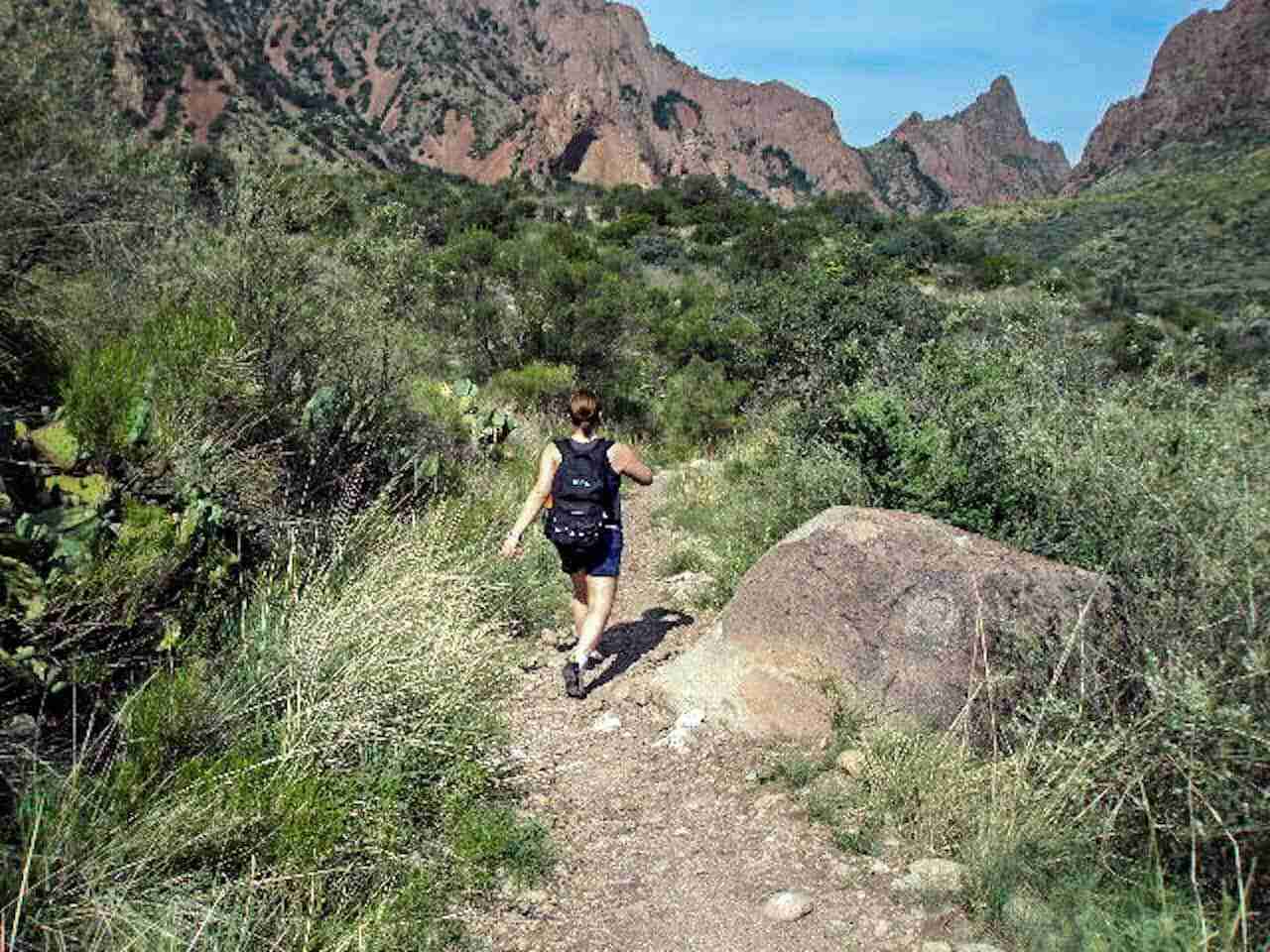 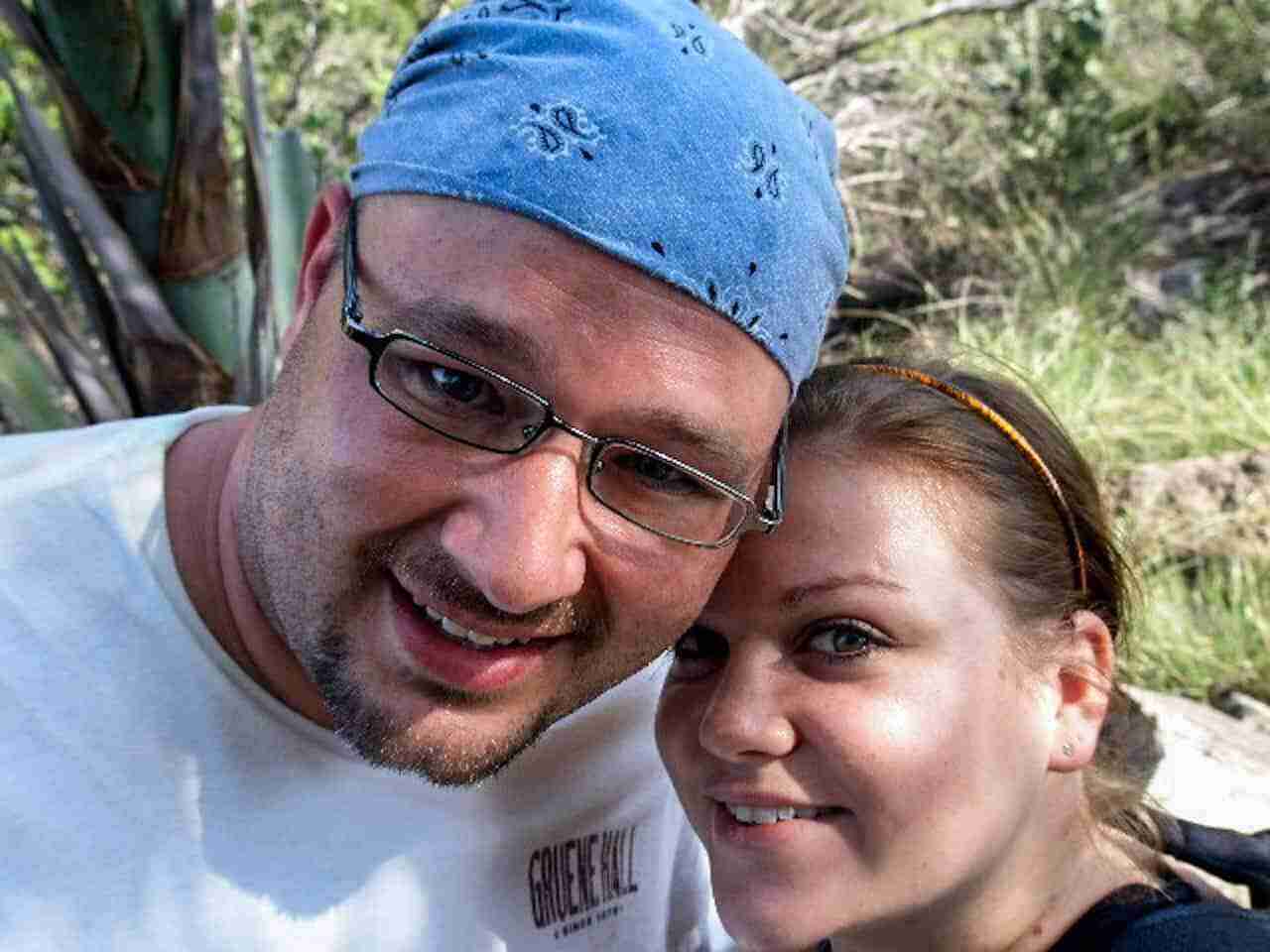 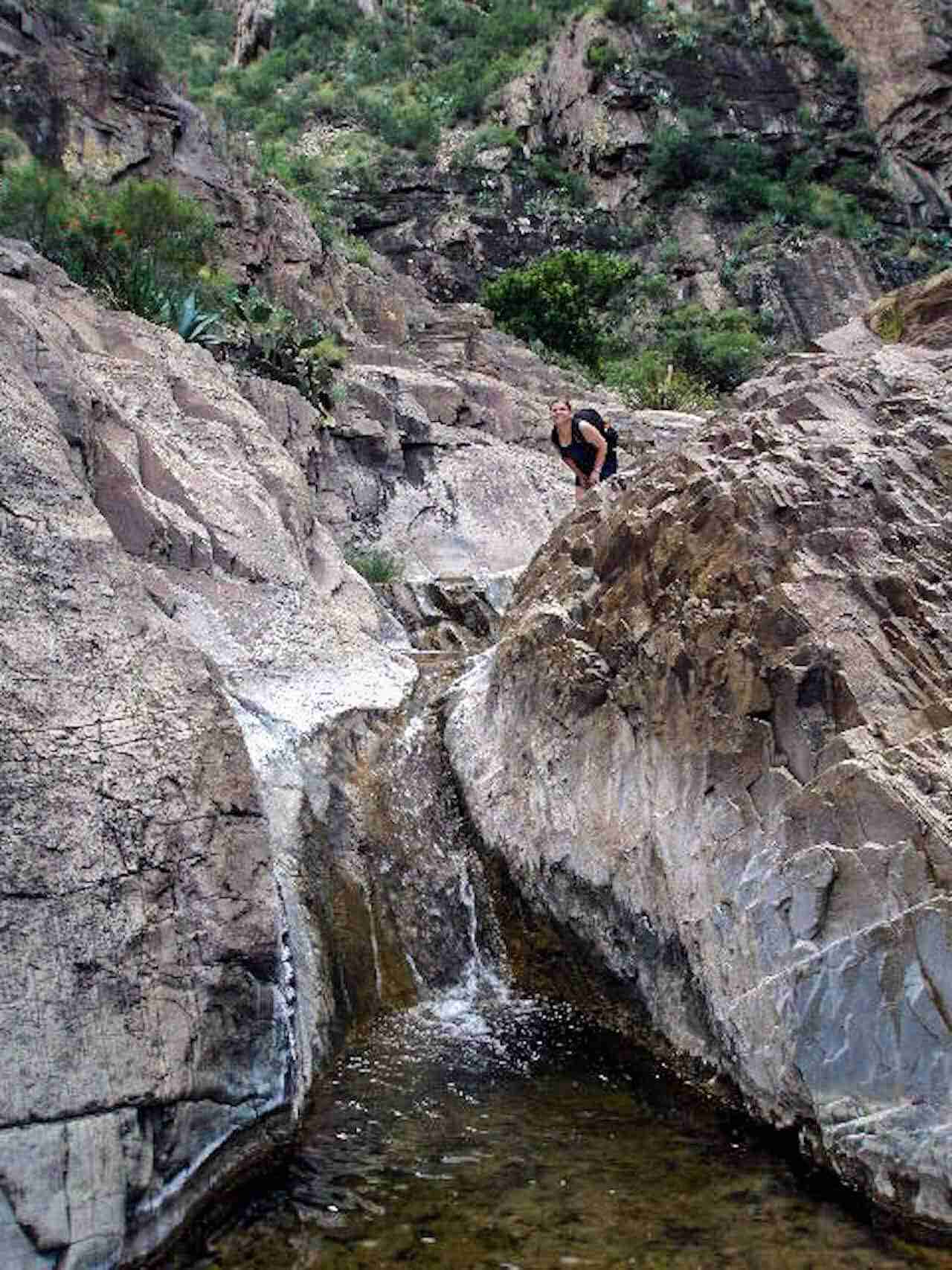 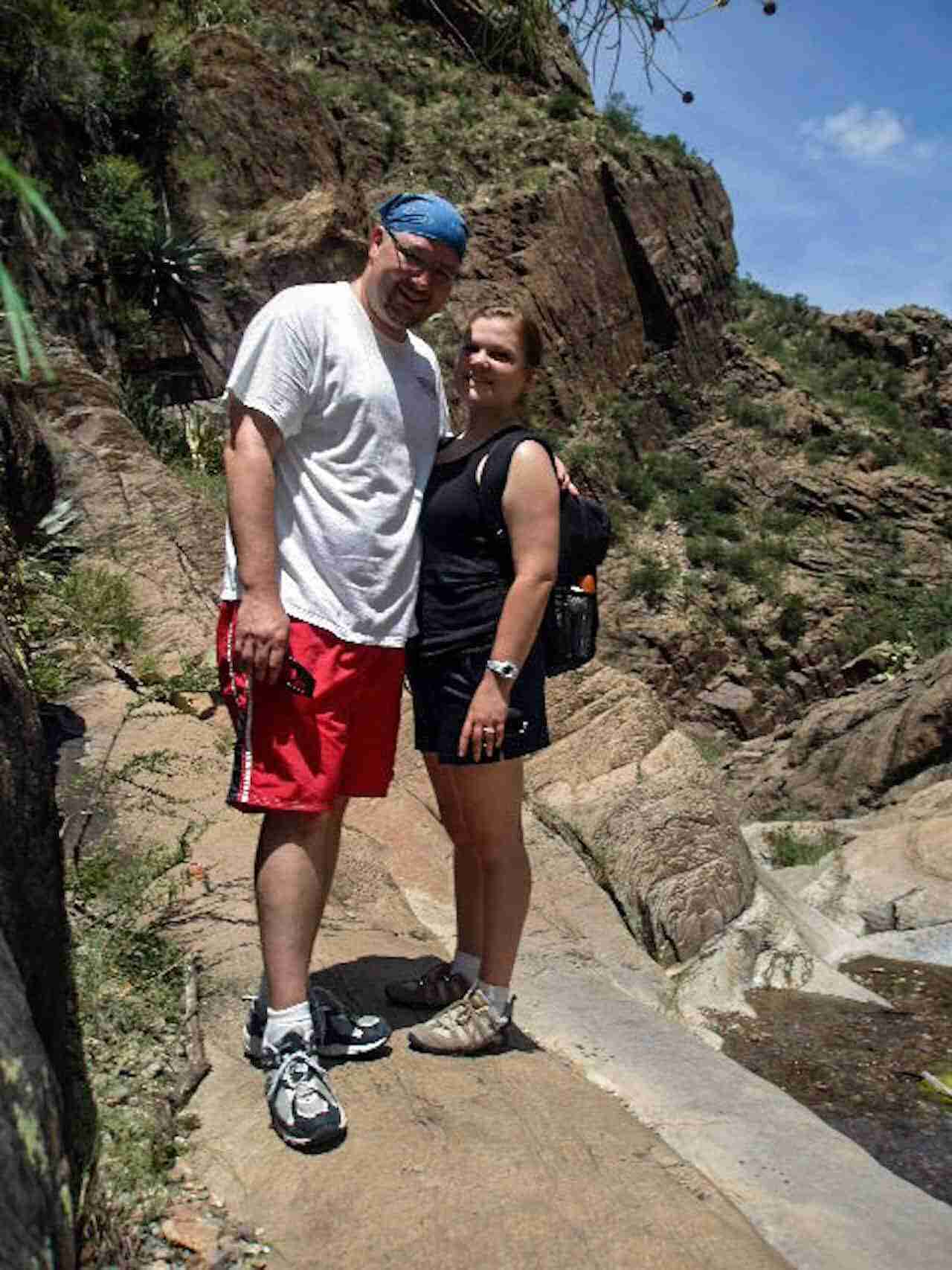 The next day included more life-changing hikes and exploration. We did the lower and upper Burro Mesa trails. The Upper Burro Mesa, a primitive trail, remains one of my favorite hikes to this day. I was finding out about myself and what I was capable of. When I say life-changing, it’s not a cliche use of the term, my life really was changed. We continued down on the Ross Maxwell Scenic Drive, still having the park completely to ourselves. We stopped at Tuff’s Canyon where you can stand on the canyon rim and look straight down to certain death. As we are staring death in the face, we turn and see Glen and Farrah quickly approaching, the only other couple in the entire park we just keep “mysteriously” encountering everywhere we go. Well, they’re certainly coming to kill us and take all our camping gear for themselves. No one would know. But instead of killing us, this time they asked what we did for a living. We both worked at a marketing agency and Stef mentioned she worked on accounts such as Sony and Lakewood Church. Upon hearing this, Farrah immediately turned to Glen and exclaimed, “See! I told you they are good people!” Wait. Two things. One, just because we work on Joel Osteen’s site doesn’t necessarily make us good people. We are though. Two, was Glen trying to convince Farrah that we were bad people and needed to be “taken care of”? I knew it! As we slowly scooted away from the edge, we quickly said we had to go and made our getaway – life intact. That was the last we saw of Glen and Farrah. I often hope Farrah is not at the bottom of Tuff’s Canyon. 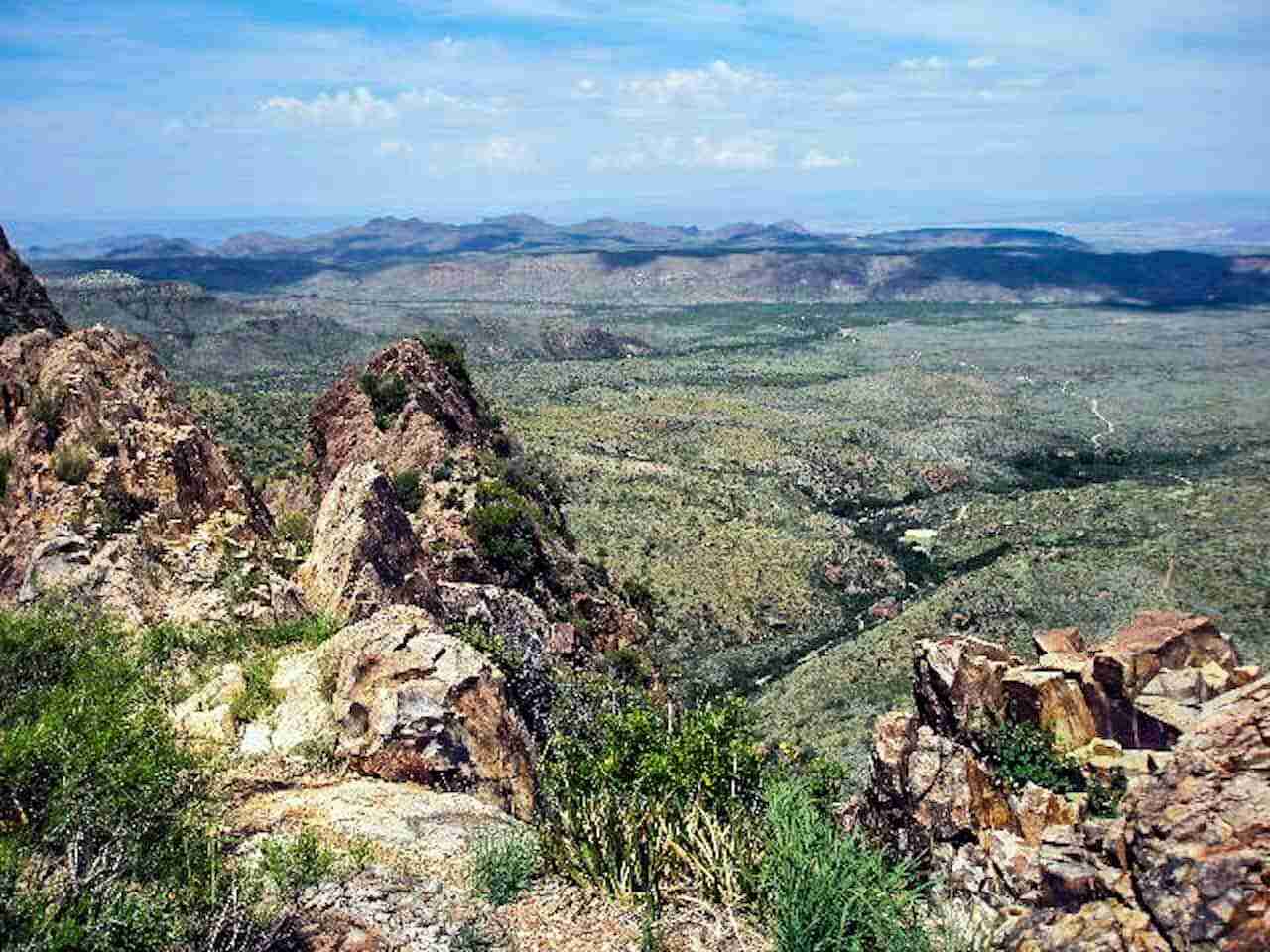 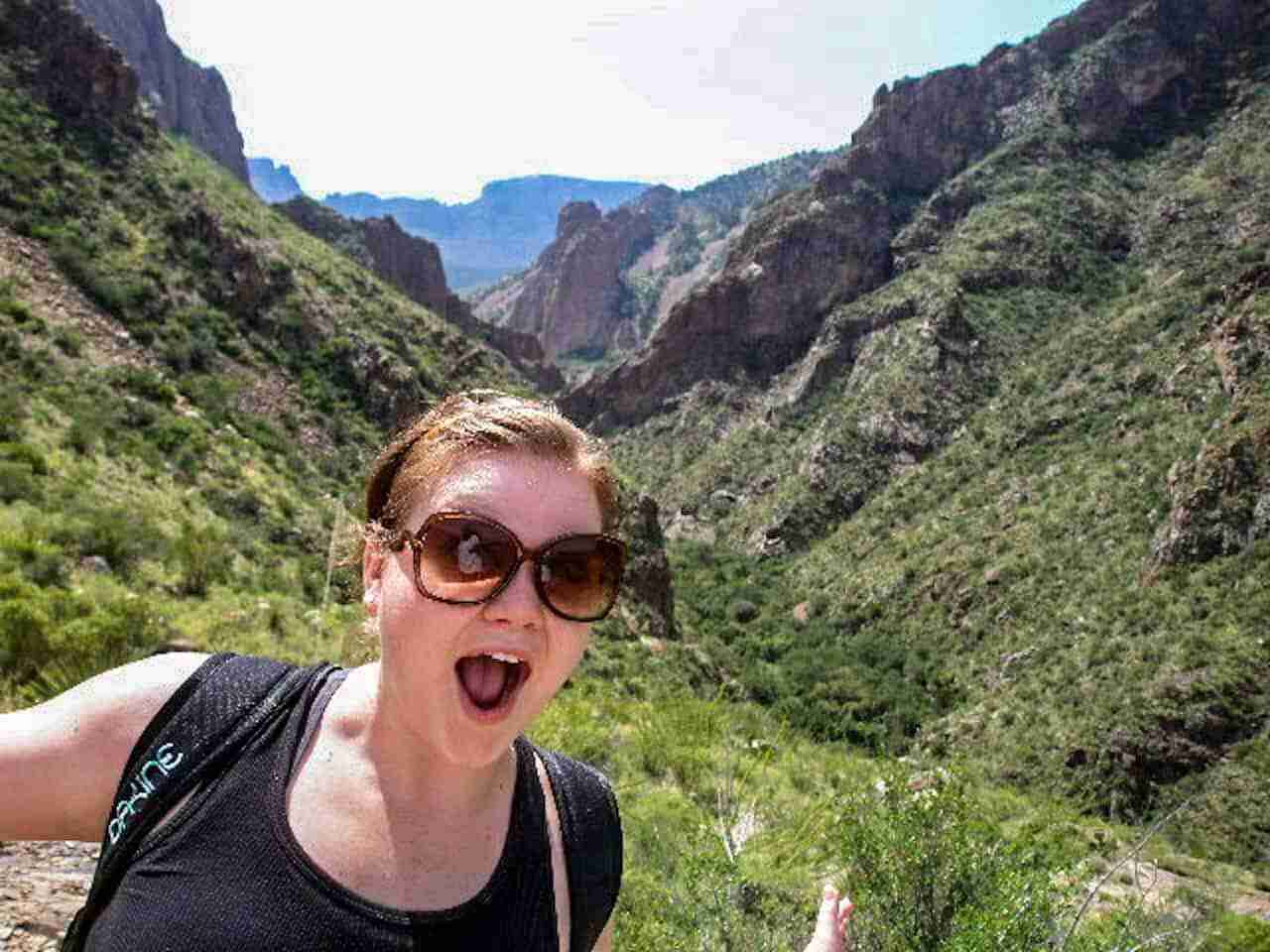 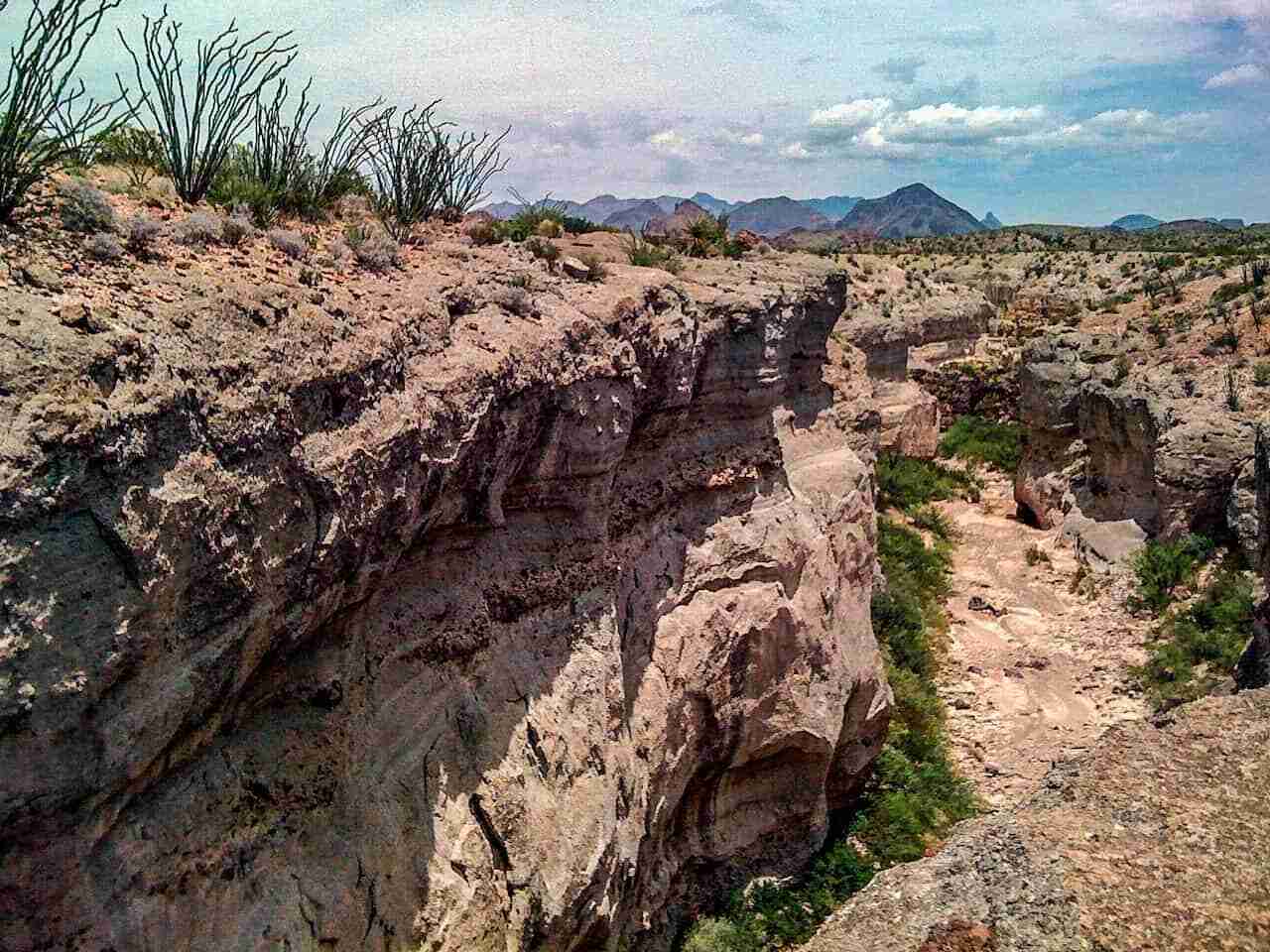 On the Rim of Tuff’s Canyon

Since that trip, we have gone back to Big Bend every year. For the past few years, I find myself visiting every 3 months. And each trip I photo-document our expeditions on social. Folks would find those shared posts so tantalizing, I started getting lots of requests for recommendations. I wrote up a suggested itinerary and would email that out. I templatized that email and added more to it each year. I finally took that email and turned it into a website. Now when people ask for recommendations, I give them my URL.

Since then, we now always found ourselves eating our annual Thanksgiving dinner at the Starlight Theatre. We have now hiked just about all the trails in the park (including Marufa Vega), visited some of the park’s best secrets, stumbled across many bears, have even conquered much of the massive state park, visited countless other national parks, and have a 1000 new stories to tell. Thanksgiving is now becoming so dang busy in the park, one of its busiest times, this year we are opting to camp the interior of the state park which is quite a long drive from Study Butte and most people NEVER make it to the interior, so we are expecting complete solitude once again. Sans Glen and Farrah. 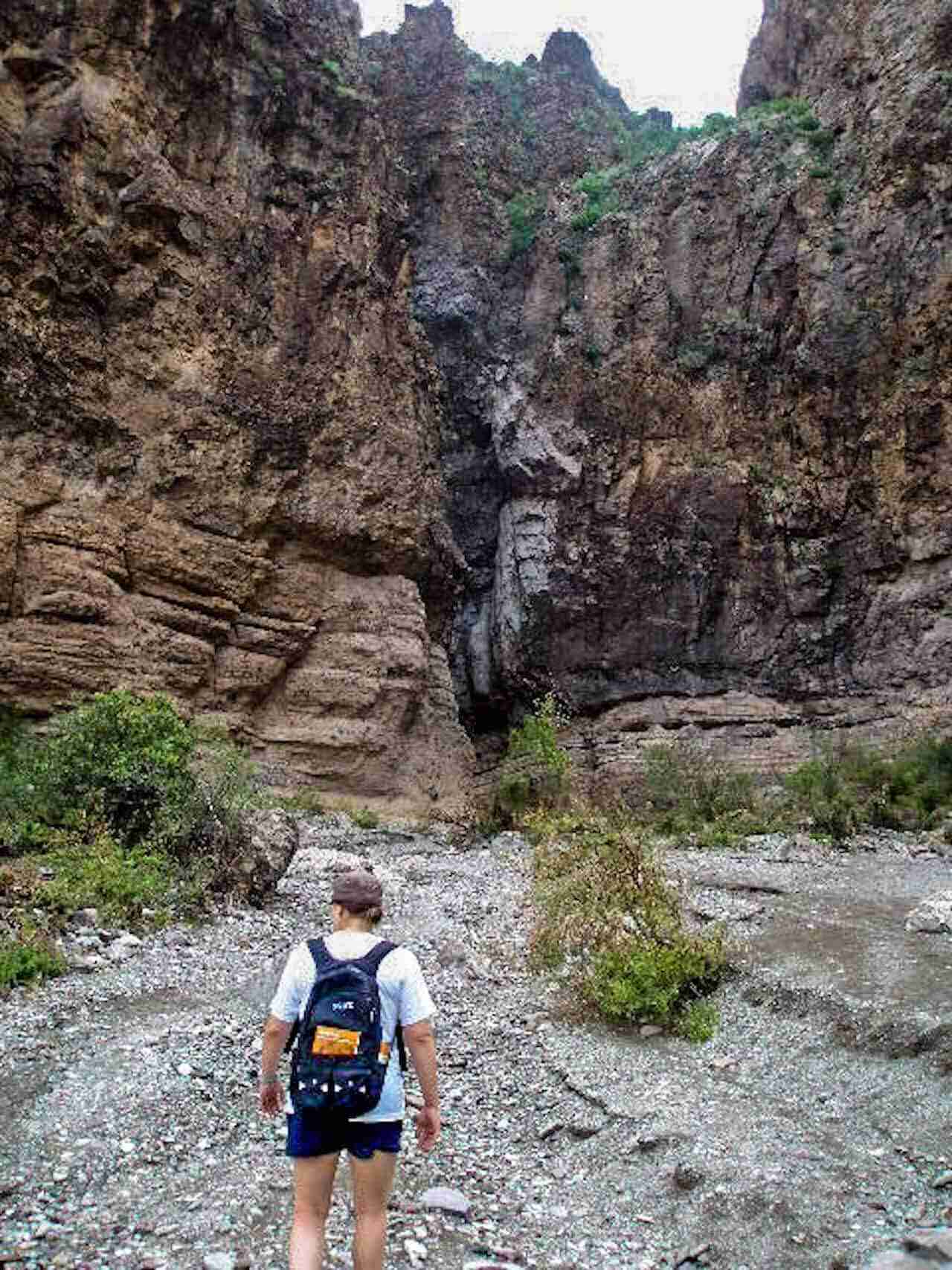 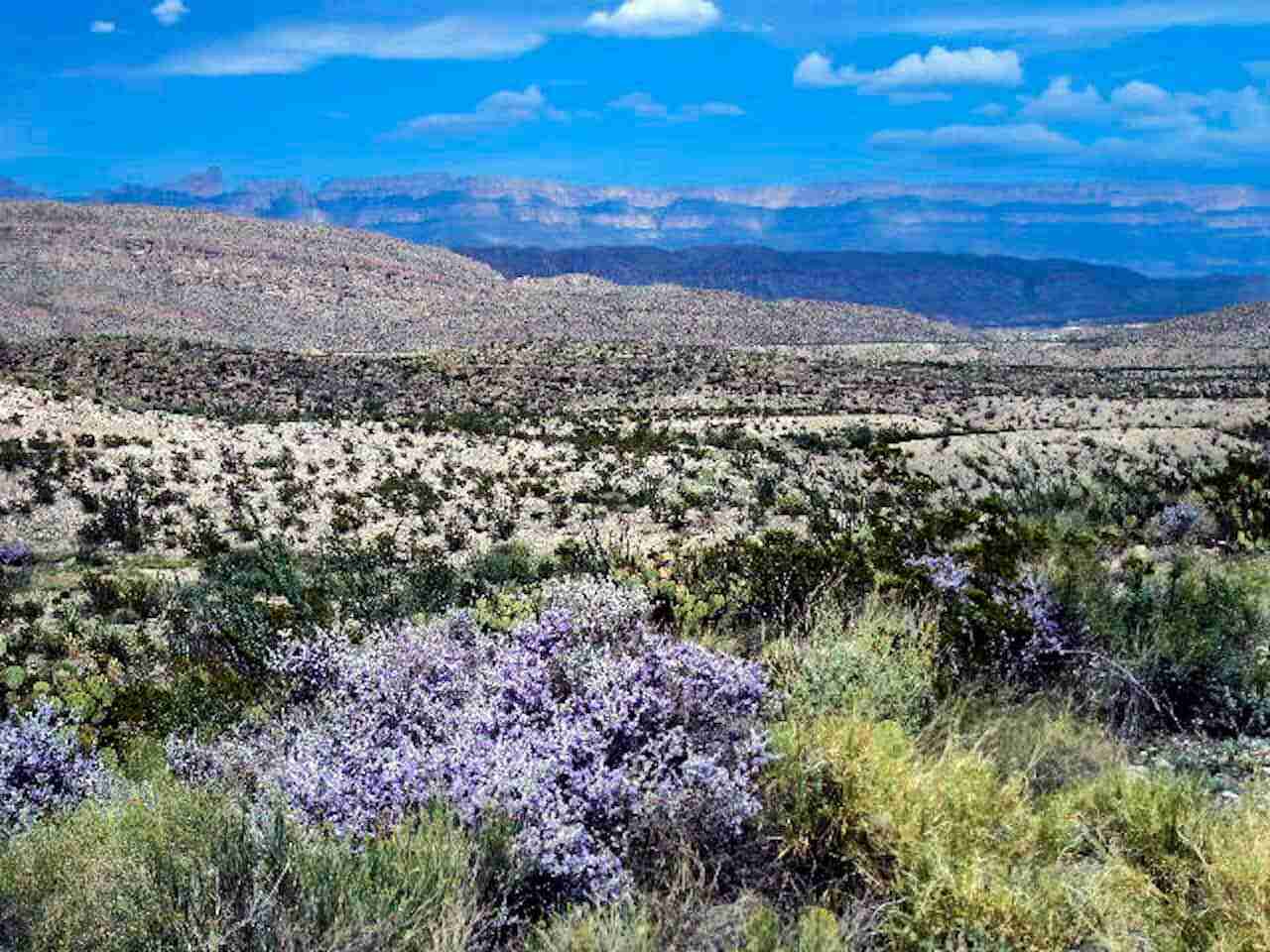 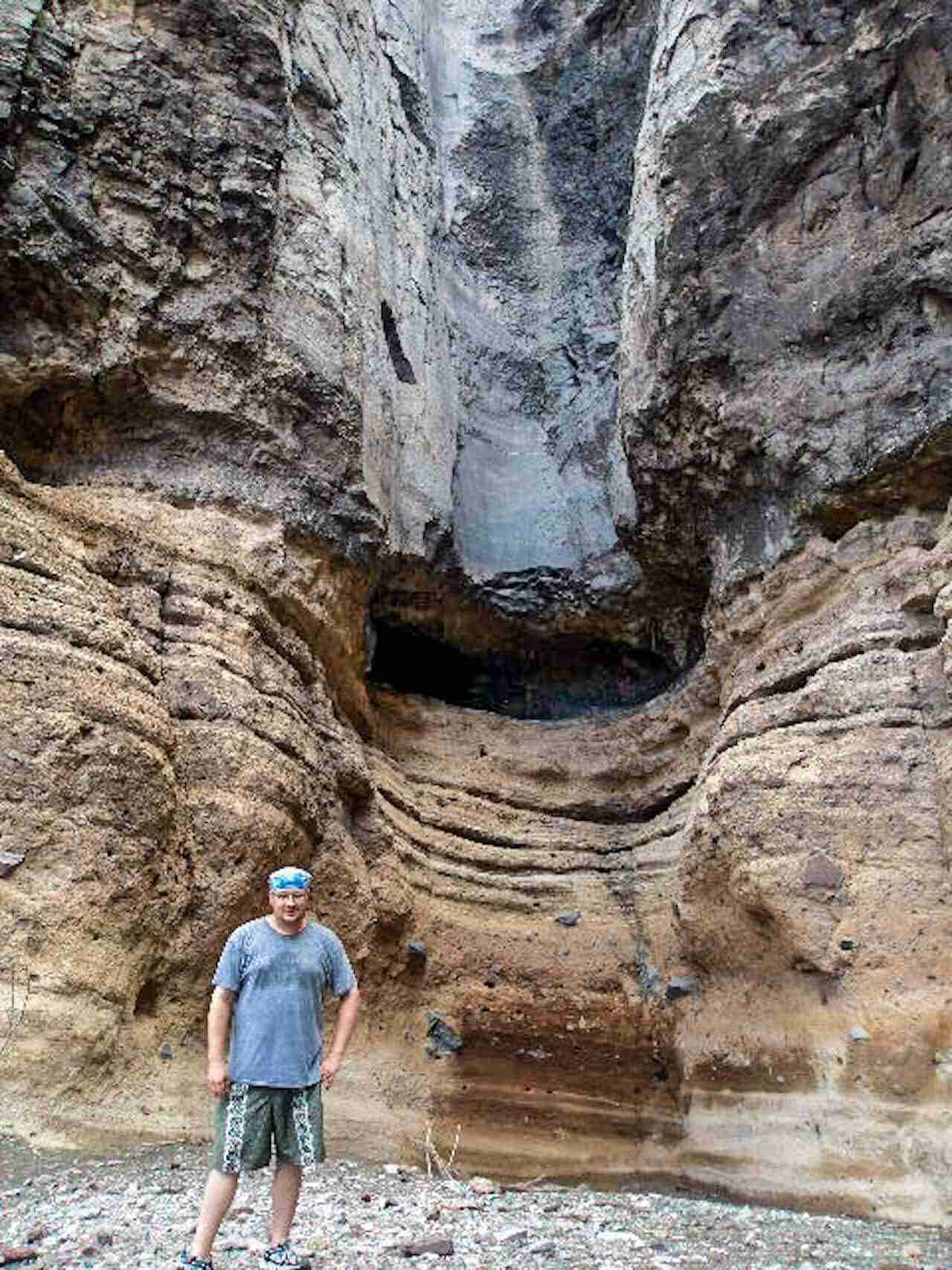 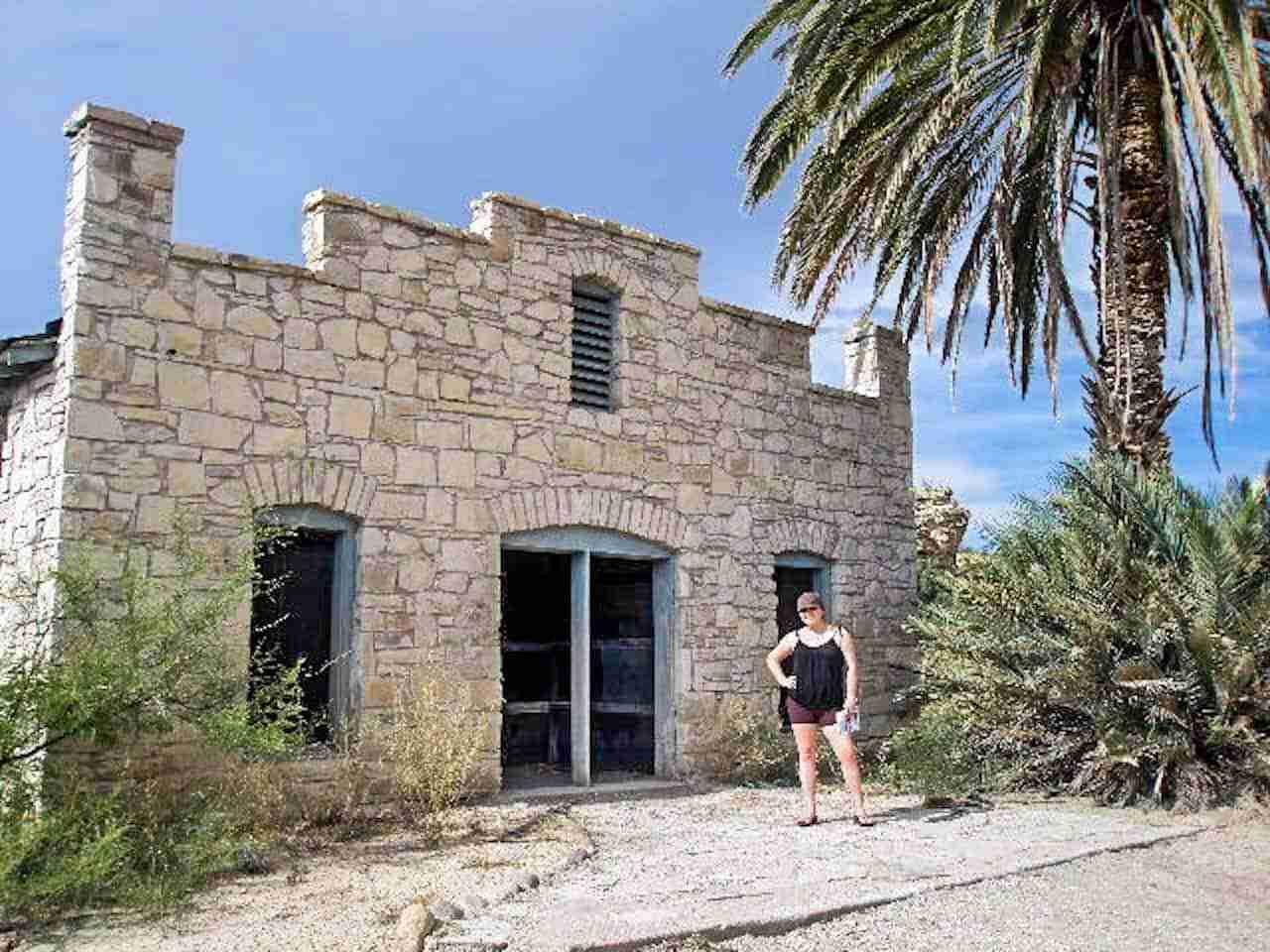 Subscribe to get upcoming posts in this series as we explore hiking trails, Big Bend Ranch, Marfa, Davis Mountains, and much more.

Schedule a 1-hour virtual guide session to help you plan your visit. 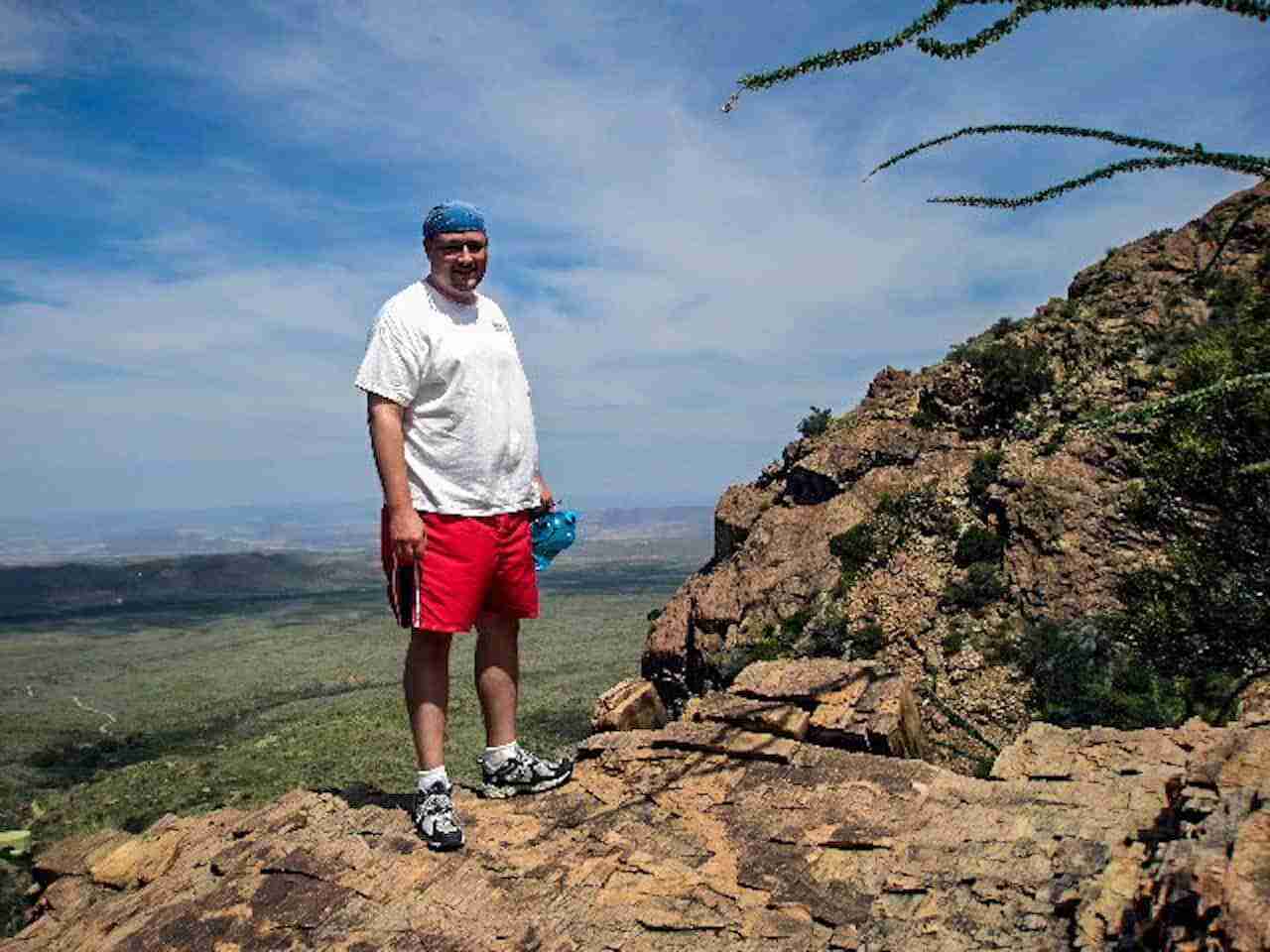 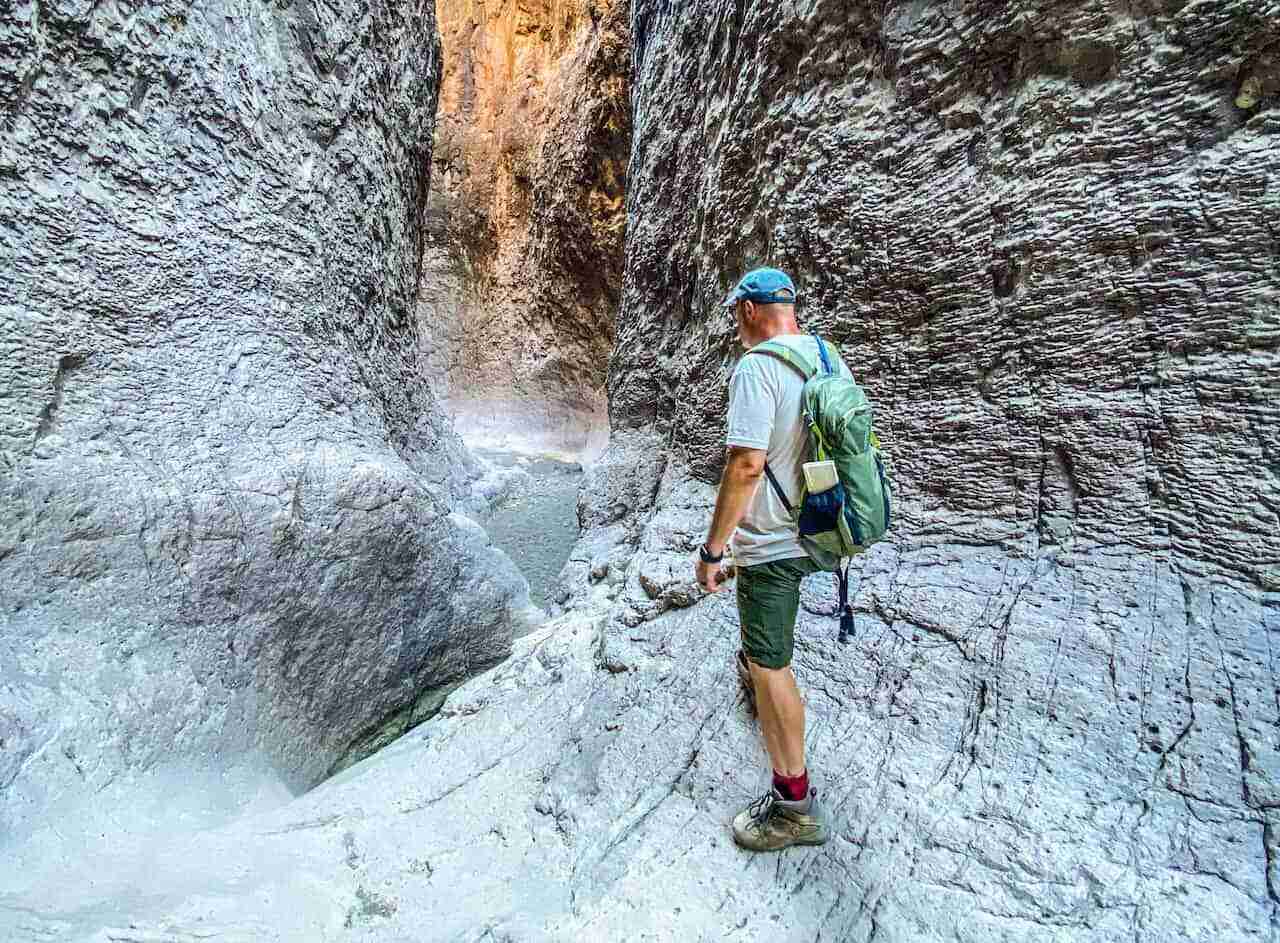 Here are a couple of videos I made…

This site uses Akismet to reduce spam. Learn how your comment data is processed.